We are excited to announce the release of a major update to our service.

We are thrilled to announce that our service has successfully undergone a major technology migration!

Our new technology platform provides faster load times, improved reliability, and increased scalability, which means users will be able to access and use our service with greater ease and efficiency.

This new feature is designed to simplify the process of setting core time policy rules such as paid time, plans, required time, and lunch.

The configurator is easy to use, allowing you to quickly define valid days and rule values with a simple and intuitive interface. This means you can spend less time configuring your time policy settings and more time focusing on other important tasks. 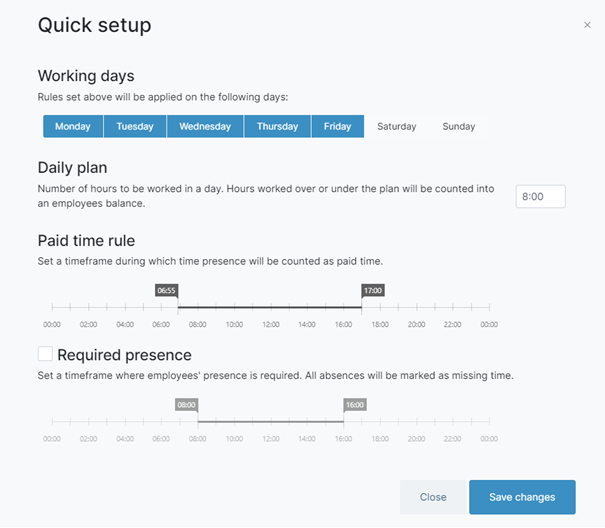 Absence planer – easily plan leave while taking the absences of your colleagues into account - 1.29

More about the new Absence planner

With the new Absence planner, you can easily plan and submit new absence requests, taking into account your colleagues' absences. You can quickly check which of your teammates or employees will be absent in a given period and plan your leave accordingly. This prevents overbooking of vacations and other absences, and prevents simultaneous absence requests from employees in cases where at least one must be present at work.

This added transparency should allow you to plan your absences, coordinate your leave with colleagues without having to check, or coordinate everything with them or managers. The calendar view of the absence planner is public, but it does not show any details about users or absences, only whether user is absent (to ensure privacy compliance).

You can access the Absence planner from the Home screen of the web application. 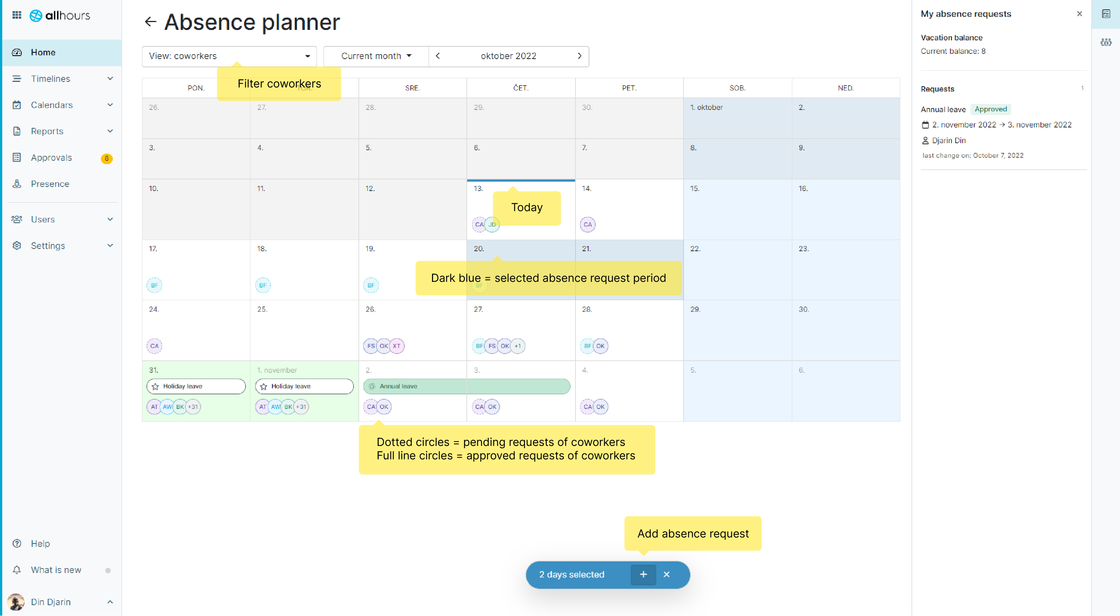 The main features of the new Absence planner:

Adjustments are changes to counters and paid time that have only been available to administrators in the past.

Users can now be given the ability to request adjustments just like absences. This is useful for requesting the unpaid to paid time approval so unpaid hours can be approved into overtime.

The setting is available on Authorization roles:

Only certain adjustments can be requested by employees: 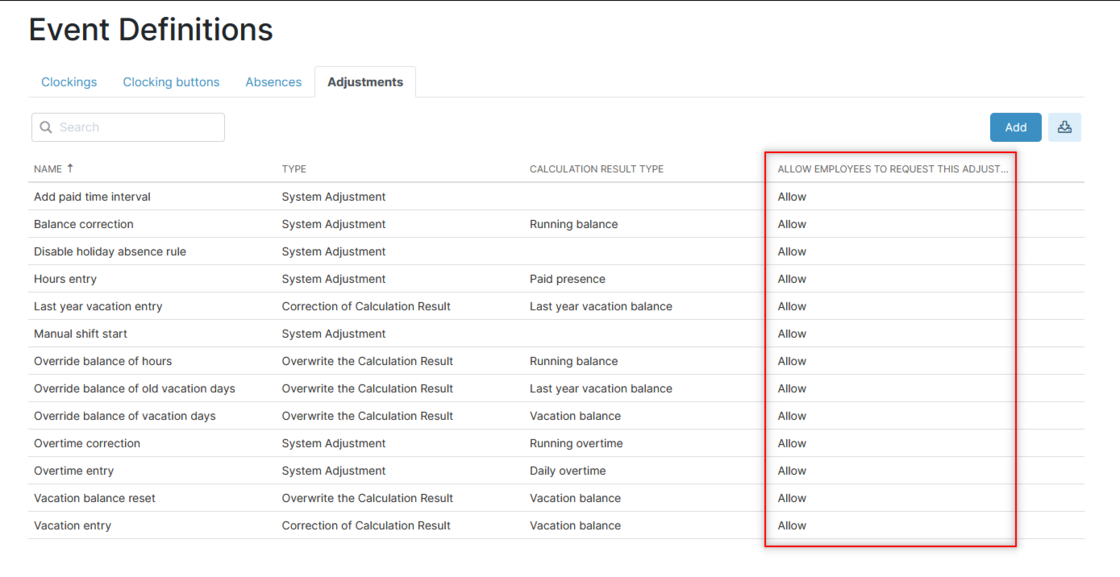 Employees can then request adjustments on the Employee day view (My day) and the adjustments will be shown as Pending for approval:

You can open a new My Hours account from the app switcher as long as you are an administrator of your All Hours account.

Users of both apps can then use the same login and password and easily switch between the two.

Be sure to visit https://myhours.com/ for more information or contact us via the in-app chat.

Mobile reminders for Clocking-in and out

We now offer both time and location based reminders so you don't forget to clock-in and out.

You will find reminder settings by tapping the Profile icon in the upper left corner of the app. 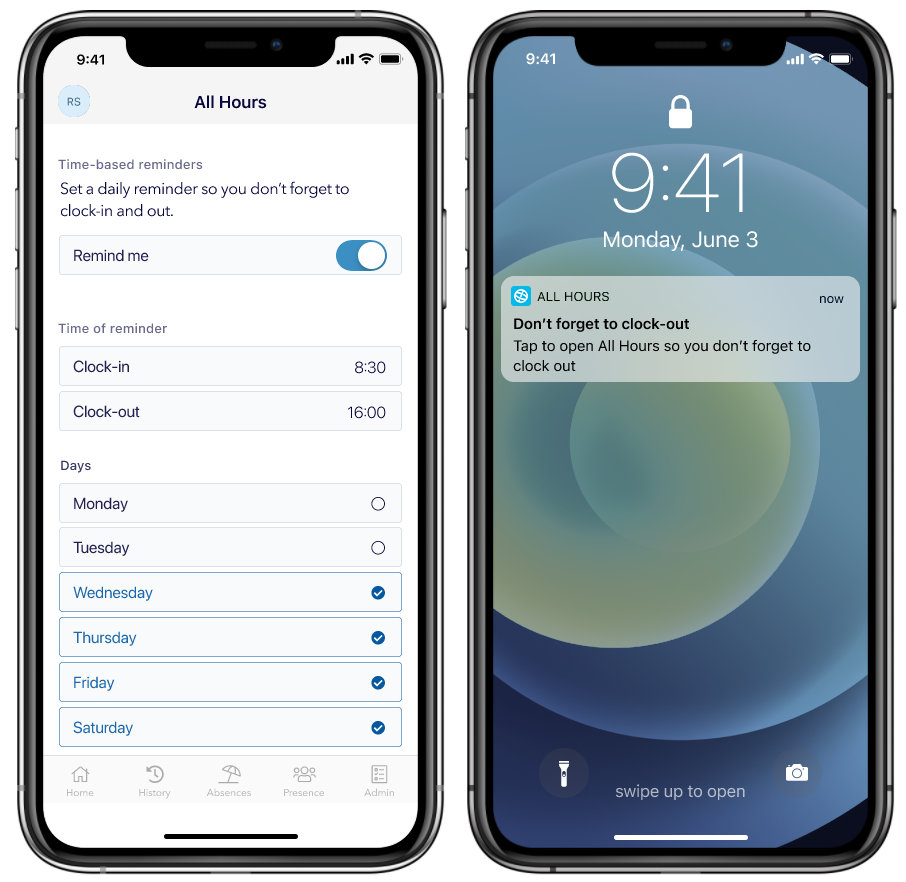 You can now find all cards that have been used on your terminals but don't belong to any users. Look for a new tab called "Unassigned identifiers" under Reports >> Event log.

This can be very useful when adding new employees to the system or trying to find a particular unknown card.

We managed to speed up some of the views in the application. We expect to have more news on this front in the coming weeks and months as All Hours becomes faster and faster.

You will notice we reorganized the user details view when editing a user.

All the general personal data along with custom ID's and custom fields is available on the first tab, while Request management and Login options have been separated into their own tabs.

Other improvements and bugfixes:

We combined the Schedule and other calendars into one single calendar page.

You can still approve and reject absences right here on the calendar.

It's also easy to switch between Absences, Schedules and other calendars on top of the page. 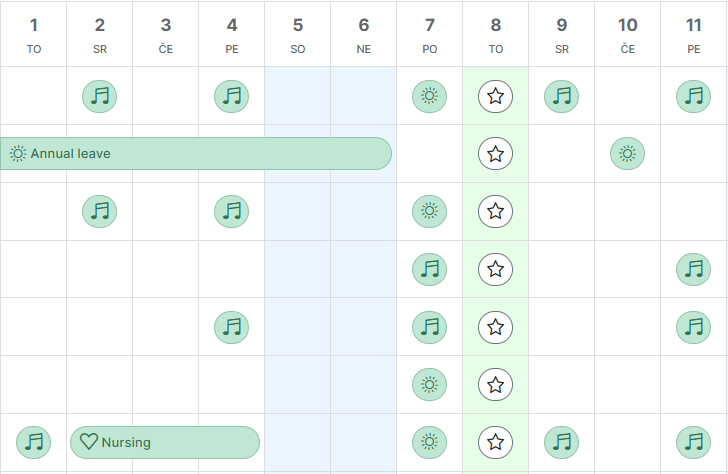 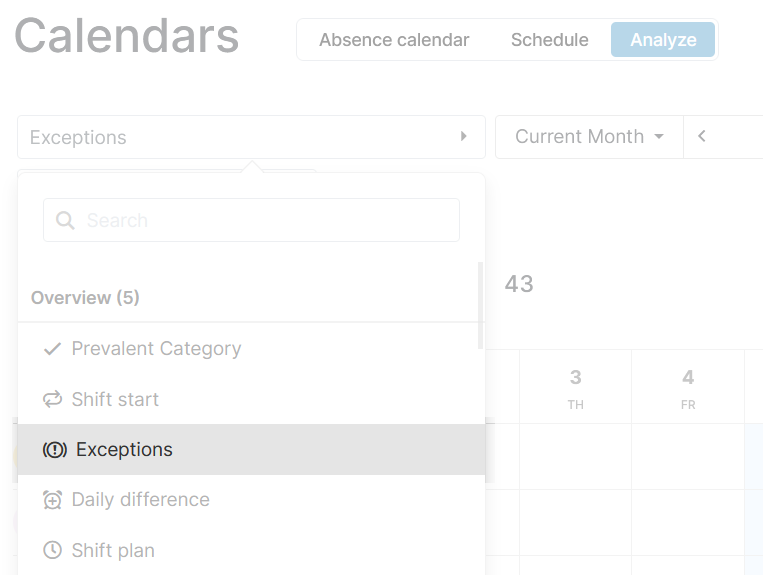 This view shows you all the days with Exceptions such as Missing during required time, days with unpaired events and other violations: 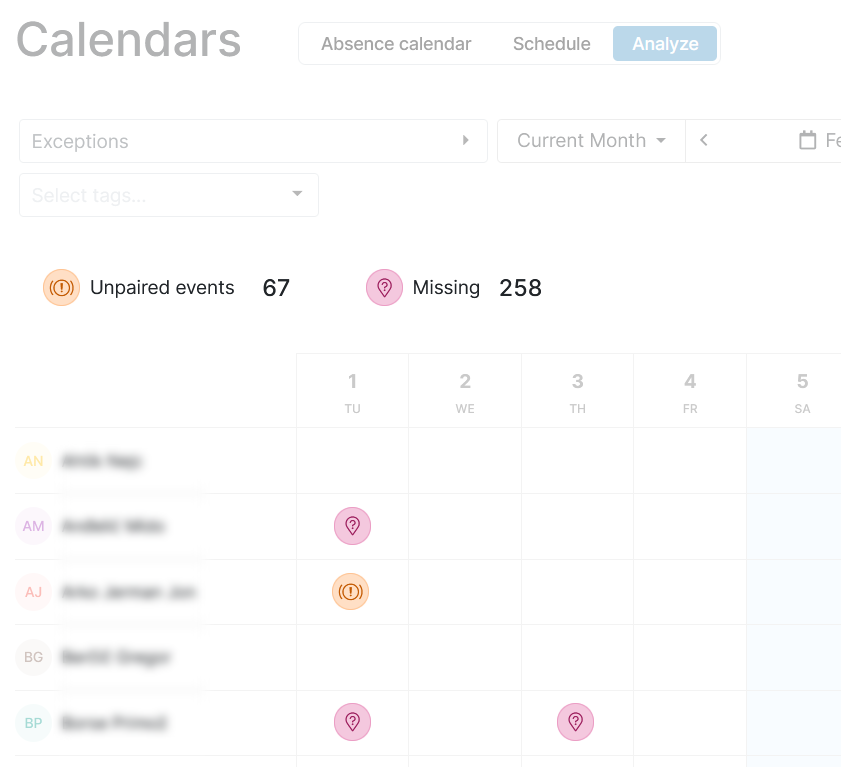 An additional badge reader can now be placed on the outside of the door and will always clock either an arrival or departure event while simultanously unlocking the door.

This means your Zone Touch terminal is safely installed on the inside of your building, leaving only the card reader on the outside.

The door is unlocked every time a clocking event is registered on the inside terminal or the outside reader giving you a very simple access control system.

We made a few small improvements and several bugfixes with the latest update:

Opening doors with our terminal - 1.22

Open doors by clocking in

Spica Zone Touch terminals can now be connected to our door controller, Zone Door, which is connected to an electric lock on your door.

The controler will unlock the doors whenever a user clocks in or out on the terminal. The door only unlocks for active All Hours users.

The Zone Door controller can be installed on existing Zone Touch instalations. 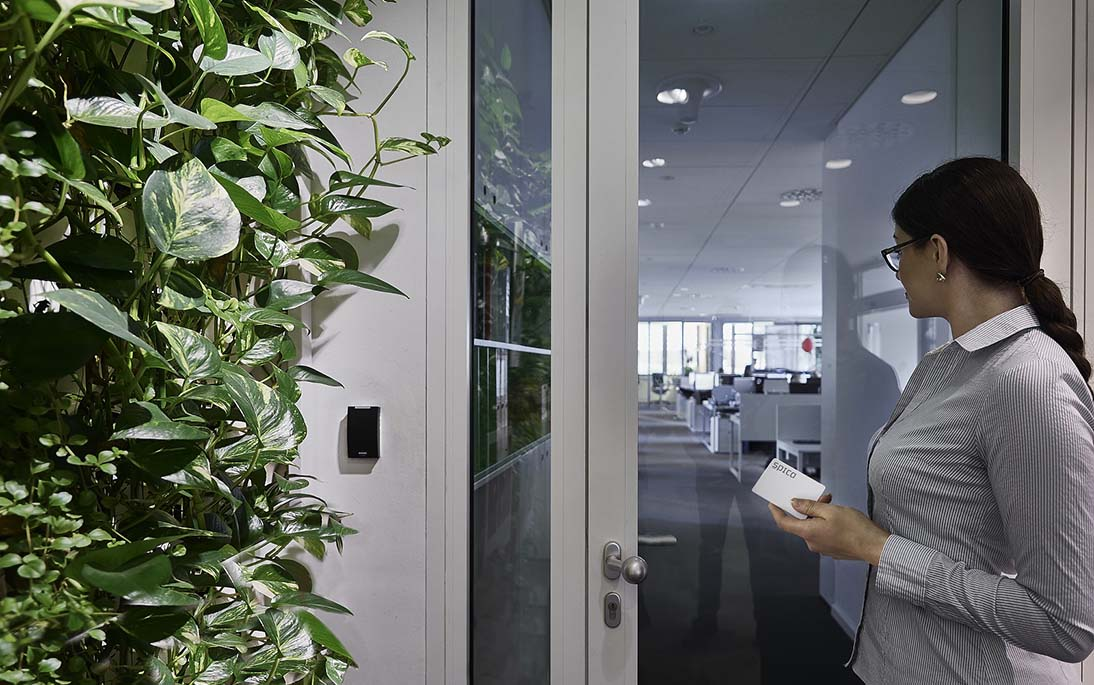 Go to clocking points and choose the terminal you need to edit and click the tab "clocking buttons".

You can also set the default event of the terminal here. This way you can easily setup one terminal on your entrance that will always clock an Arrival event and one at your exit that will clock a Departure event. 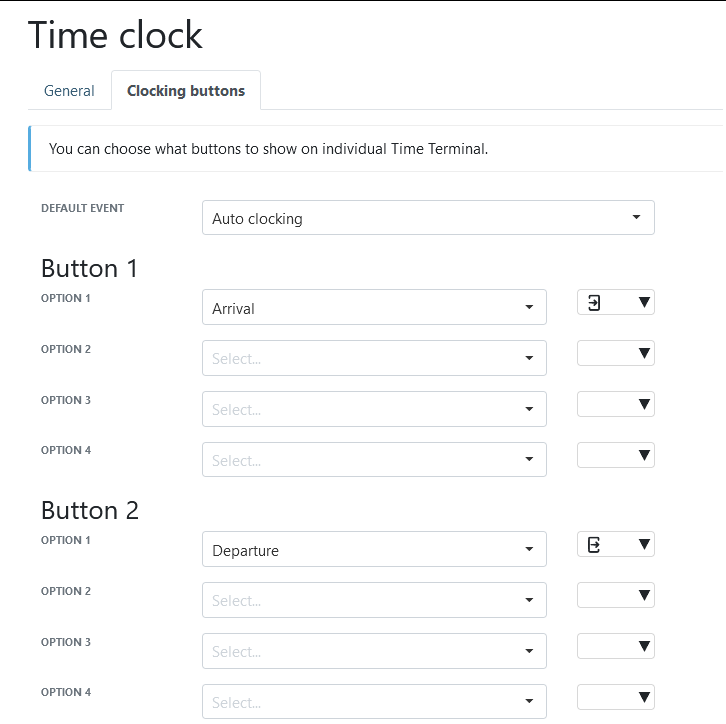 We have simplified the logic of auto clocking events resulting in faster calculations and fewer errors.

The auto clocking event simply checks what came before it - if it is preceded by an Arrival it will turn into Departure and vice versa and never changes on its own again.

Even if you add more events before this clocking later, the auto clocking will remain the same untill manually edited by an administrator.

Besides speeding things up, this should also result in fewer errors for workers leaving their night shifts and similar situations.

Schedules on Mobile and more

The latest update to our mobile apps gives you a list view of your days where you can check your balances as well as your upcoming schedule: 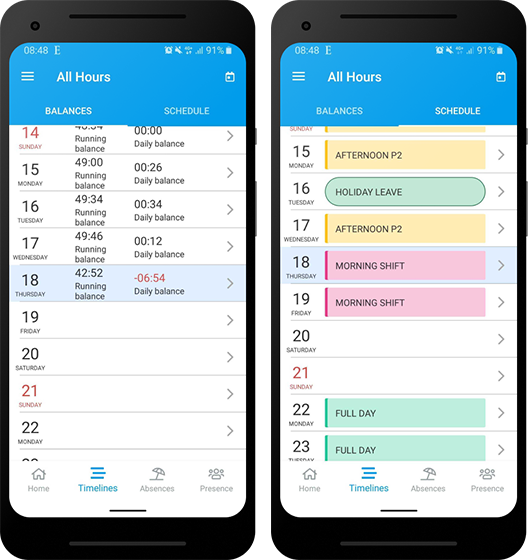 How to set schedules as an administrator? 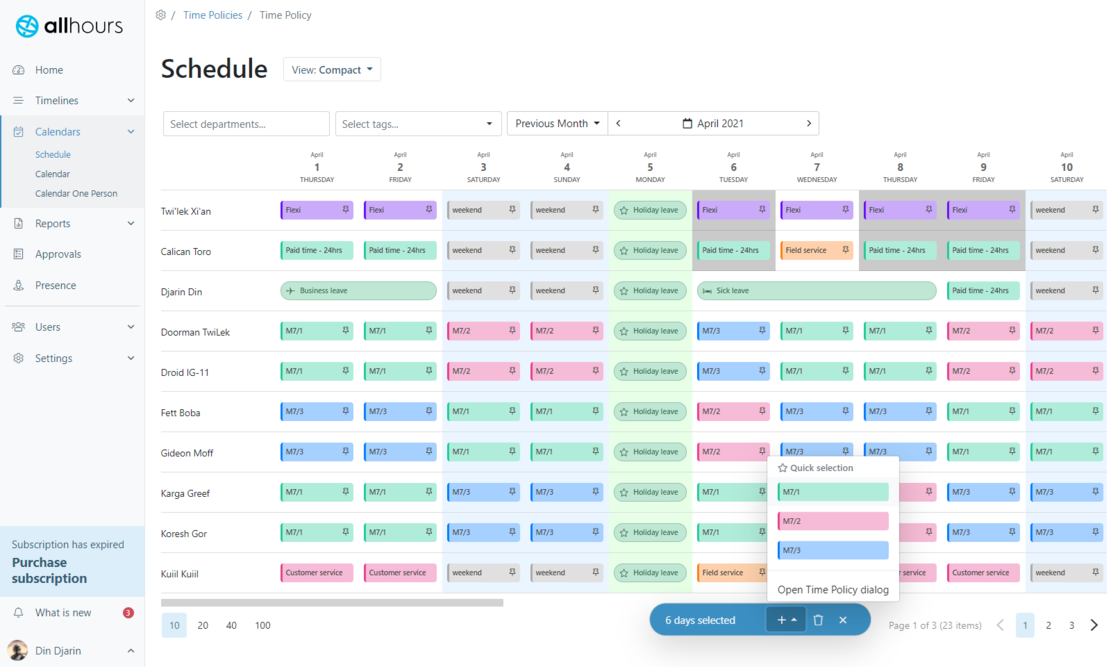 Find the Schedule view under Calendar in the navigation. Any administrator level user with access to the Calendar and permissions for Adjustments can use it.

We quietly shipped some improvements to All Hours in the past few weeks :) 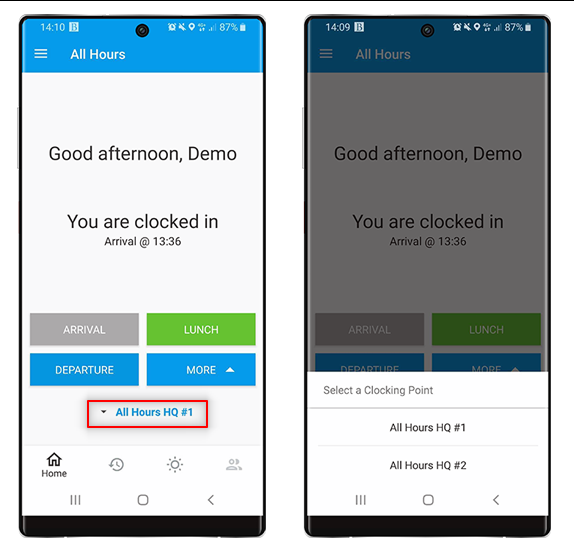 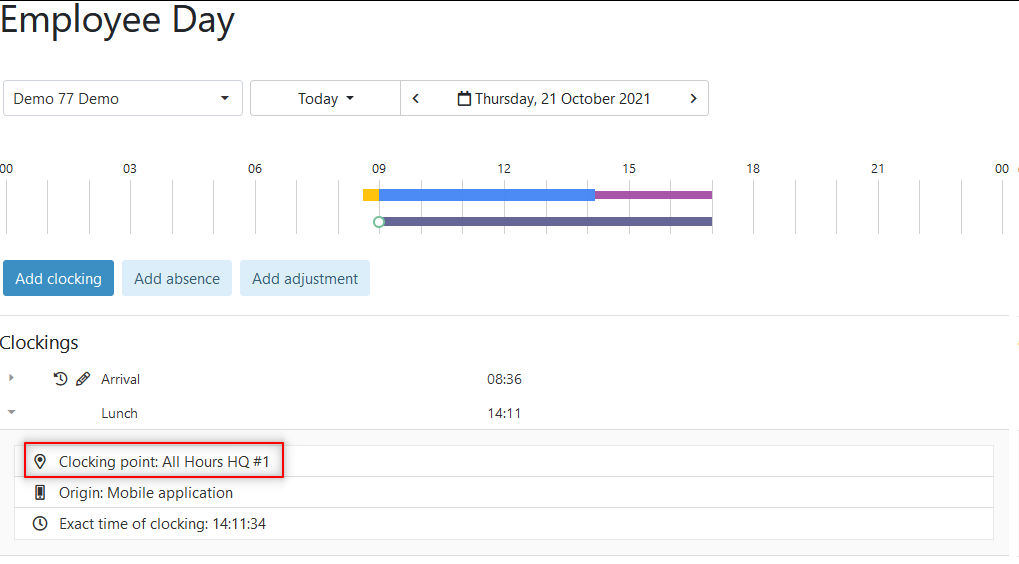 We'll be back soon with more updates including the ability to unlock doors when clocking on a terminal, seeing a calendar view of your schedule on mobile, and more.